The damage evolution mechanism of rocks is one of the most important aspects in studying of rock fatigue behavior. Fatigue damage evolution of three rock types (onyx marble, sandstone and soft limestone) with different brittleness were considered in the present study. Intensive experimental tests were conducted on the chosen rock samples and acoustic emission (AE) sensors were used in some of them to monitor the fracturing process. Experimental tests indicated that brittleness strongly influences damage evolution of rocks in the course of static and dynamic loading. AE monitoring revealed that micro-crack density induced by the applied loads during different stages of the failure processes increases as rock brittleness increases. Also, results of fatigue tests on the three rock types indicated that the rock with the most induced micro-cracks during loading cycles has the least fatigue life. Furthermore, the condition of failure surfaces of the studied rocks samples, subjected to dynamic and static loading, were evaluated and it was concluded that the roughness of failure surfaces is influenced by loading types and rock brittleness. Dynamic failure surfaces were rougher than static ones and low brittle rock demonstrate a smoother failure surface compared to high brittle rock. 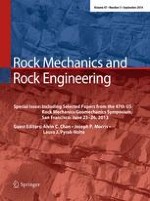