While many studies have investigated consumer purchase behavior in reward programs, a better understanding of customer redemption behavior is lacking, particularly when promotions affect a core aspect of reward programs—free rewards. In this paper, we examine the impact of a promotion on purchase and reward redemption in a reward program in which consumers can partially cover the cost of a free reward with their money. The literature on reward programs suggests a positive reinforcement caused by reward redemption, whereas the literature on promotion provides different views regarding the existence of a postpromotion dip. Using data from a major retailer’s reward program, we verify that such a promotion attracted customers with less transaction activity and shorter tenure. Interestingly, consumers using the promotion increased their preference for hedonic rewards compared to their previously observed behavior. This change in preference persisted after the promotion ended. Overall, the promotion significantly increased the number of redemptions but generated a negative impact on subsequent consumer behavior by decreasing purchase incidence and quantity. Our findings point to a need to understand the trade-off between spending money on buying an otherwise free reward and future regular purchases. 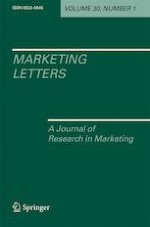 Roles of a preselling strategy under asymmetric information

Consuming together (versus separately) makes the heart grow fonder

Brand loyalty evolution and the impact of category characteristics