In the sport of curling, stones are slid across an ice sheet, aimed towards a target area. A sliding stone does not move in a straight line, but follows a curled trajectory, deviating in a direction determined by its rotation. As yet, no satisfactory explanation for this motion has been presented, although many attempts have been made. In many of them, the curling motion has been attributed to an asymmetrical distribution of the friction force acting on the sliding stone, typically such that the friction on the rear of the stone (as seen in the direction of motion) is higher than that on the front. In this paper, the motion of a rotating curling stone sliding over ice is calculated, for different assumed distributions of the coefficient of friction in the contact between stone and ice, using a numerical method. It is shown that no redistribution of the friction, no matter how extreme, can explain the observed motion of a real curling stone. 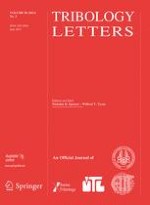 Synergy Between Corrosion and Wear of Electrodeposited Ni–W Coating

Tribological Behavior of Ti3AlC2 Against SiC at Ambient and Elevated Temperatures

Initiation of Galling in Metal Forming: Differences Between Aluminium and Austenitic Stainless Steel Studied In Situ in the SEM