Although various theories have been adopted to develop reliable pedestrian walking models, a limited effort has been made to calibrate them rigorously based on individual trajectories. Most researchers have validated their models by comparing observed and estimated traffic flow parameters such as speed, density, and flow rate, or replaced the validation by visual confirmation of some well-known phenomena such as channelization and platooning. The present study adopted maximum likelihood estimation to calibrate a social-force model based on the observed walking trajectories of pedestrians. The model was assumed to be made up of five components (i.e., inertia, desired direction, leader–follower relationship, collision avoidance, and random error), and their corresponding coefficients represented relative sensitivity. The model also included coefficients for individual-specific characteristics and for a distance-decay relationship between a pedestrian and his/her leaders or colliders. The calibration results varied with the two density levels adopted in the present study. In the case of high density, significant coefficient estimates were found with respect to both the leader–follower relationship and collision avoidance. Collision avoidance did not affect the pedestrian’s walking behavior for the low-density case due to channelization. The distance limit was confirmed, within which a pedestrian is affected by neighbors. At the low-density level, by comparison with women, men were found to more actively follow leaders, and pedestrians walking in a party were found to be less sensitive to the motion of leaders at the high-density level. 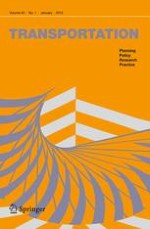 A Bayesian method for estimating traffic flows based on plate scanning

Quantifying the transport-related impacts of parental school choice in England