The online version of this article (doi:10.​1007/​s13280-016-0808-3) contains supplementary material, which is available to authorized users.
Hui Huang and Colin Kuo-Chang Wen have contributed equally to this work.

Marine reserves (MRs) have emerged as a preferred method to protect coral reefs from overfishing and human disturbance. However, due to ineffective enforcement by governments, many MRs have been reduced to mere “paper parks” which fail to achieve conservation goals. This is especially true in countries such as China where compliance is low and resources dedicated to enforcement may be scarce. Privately managed marine reserves (PMMRs) may be effective in areas where government enforcement is lacking. To determine if PMMRs are a viable alternative strategy to protect coral reefs, we surveyed and compared fish assemblages and coral coverage in national MRs in Sanya, China to areas of reef privately leased to and managed by dive operators and hospitality industries. We found higher fish abundances and fish sizes in PMMR sites than in MR sites. However, while PMMRs are protected from fishing, other human impacts such as marine debris and illegal coral collection were evident in most tourist sites. Despite protection, long-term monitoring data of PMMRs revealed that in recent years, fish abundances have slightly recovered but species richness has not, indicating the need for a more comprehensive coral reef management plan. We strongly recommend coupling PMMRs with expertise supported regulations as an alternative coral reef management strategy in China. 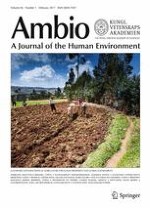 What is at stake? Status and threats to South China Sea marine fisheries

Sustainable intensification of agriculture for human prosperity and global sustainability

Tropical grasslands: A pivotal place for a more multi-functional agriculture