Touch mode capacitive pressure sensor offer better performance in many applications than other devices. In touch mode operation of a capacitive pressure sensor the diaphragm touches the bottom of the substrate. Due to this several advantages such as near-linear output characteristics, large over range pressure and robust nature of the device was observed, which made it possible to withstand harsh industrial environment. To obtain better performance on the existing single sided touch mode capacitive pressure sensor (STMCPS) a double sided one has been proposed. In double sided touch mode capacitive pressure sensor (DTMCPS) an additional notch was etched at bottom of the substrate. So far in literature the advantage of DTMCPS over single sided has been discussed i.e. linear output characteristics, large over range protection and robust structure but no work is present which elaborates step by step calculation of performance parameters such as capacitance and sensitivity. Here we have completely derived the underlying expressions for performance parameters. The next step has been to validate our claims of higher sensitivity of this structure over single sided one. So MATLAB has been introduced and interpretations have been made. It has been proved that for the same size and touch point pressure as used in STMCPS the linear range of operation can be extended and the sensitivity can be enhanced for DTMCPS. Furthermore by addition of a notch the reliability of the sensor is also improved.
Anzeige 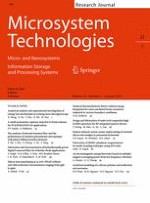