Does the revolving door phenomenon erode bureaucratic integrity? To answer this question, we undertake a quantitative case study of a private university in South Korea that recruited a former vice minister of education as its president. Specifically, we investigate whether after employing this high-ranking former public official the university received favorable treatment from the education ministry in terms of funding. Estimates from difference-in-difference, triple difference, and synthetic control methods all suggest that the high-profile public official’s recruitment is associated with financial benefits from the official’s former employing agency; no such advantage, however, was observed for benefits from other agencies. This result offers suggestive but compelling evidence that the revolving door distorts the allocation of government resources; the financial benefits the university received are due not to the recruited official’s greater competence, expertise, or knowledge but rather to his implicit collusion with the government. 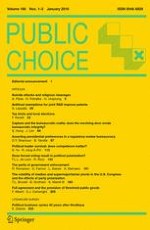 Full agreement and the provision of threshold public goods

The perils of government enforcement