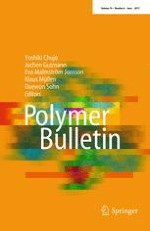 Using biodiesel as a green solvent in the polymerization reactions: the attempt to separate the biodiesel from the polymer by thermal treatment

Erratum to: Structure of a self-assembled network made of polymeric worm-like micelles

Fabrication of asymmetric and symmetric membranes based on PES/PEG/DMAc