Due to a humid climate, karst areas in south China have an abundance of groundwater. With the development of agriculture, industry, and mining, the potential factors that may result in catastrophic groundwater pollutions are increasing. A phosphorus groundwater pollution event and its subsequent emergency treatment at Penshuidong Cave in Songming, Yunnan Province on February 24, 2008 were analyzed in addition to water quality monitoring in the region. The results showed that concentrations of phosphates, fluoride, cyanides and volatile phenols in phosphorus sludge waste liquid to be 11,532, 252, 224, 200 times higher than that of the Environmental quality standards for surface water (GB 3838-2002) III, respectively. The element phosphorus concentration was 16,510 times higher than the limit set by the Water quality standard for fisheries (GB11607-1989). The addition of quicklime and water to the phosphorus sludge waste liquid dumping pit clearly decreased pollutant concentrations, which indicates that the quicklime can remove the phosphorus from the waste liquid. Peak values of pollutant concentration decreased along the flow direction, which suggests the highly concentrated polluted water mass may be diluted during its movement. After treatment with water, a pollutant concentration peak appears at the groundwater outlet indicating that washing may accelerate the moving speed of the pollutants in groundwater. Element phosphorus concentrations, however, remained at a high and stable range(46–65 times higher than the limit set by the Water quality standard for fisheries). 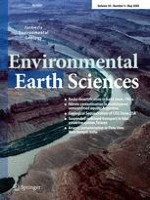 Impacts of coal mining subsidence on the surface landscape in Longkou city, Shandong Province of China

Landslide susceptibility assessment in the İzmir (West Anatolia, Turkey) city center and its near vicinity by the logistic regression method

Driving forces behind land use and cover change in the Qinghai-Tibetan Plateau: a case study of the source region of the Yellow River, Qinghai Province, China