Pervasive media censorship in China is often seen as a strictly political issue. Although in past years reporters have had leeway to report on economic issues, the Chinese Party/state has moved to tamp down economic journalism, even arresting those who report on bad economic news. This shift brings to the fore an issue long ignored by social scientists – economic censorship. Economic censorship takes place when state-owned enterprises (SOEs) or large private companies pressure the state to censor negative reports or directly pay off media companies to quash such reports in favor of more positive ones. Such economic censorship distorts markets and shifts investor money away from new market entrants and towards large, well-resourced and well-connected SOEs. Using a database of Chinese newspaper articles from 2004 to 2006 and a separate database of newspaper articles, blog posts and micro-blog posts from 2010, and supplemented by secondary sources, this paper examines how media coverage is distorted by censorship and corruption to the benefit of China’s entrenched interests. In particular, I find that private and provincially owned companies receive much more press coverage than do their central government (SASAC) owned equivalents, controlling for a number of factors.

Titel
Censorship, the Media, and the Market in China
Autor:
Jonathan Hassid 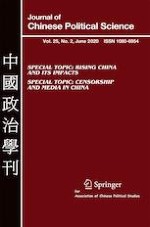 Linehan, P. M., The Culture of Leadership in Contemporary China: Conflict, Values, and Perspectives for a New Generation

Why Do Firms Obey?: the State of Regulatory Compliance Research in China

Teresa Wright, ed., Handbook of Protest and Resistance in China