Due to development of different technologies there has been significant improvement in quality of life. As a result of that, average person’s lifetime duration has been increased. That triggers the problem of independent living of senior citizens. One of the main concerns of the world today is how to enable senior citizens to live independently. As a response to that, systems like eWALL are being developed. eWALL for Active Long Living is a FP7 funded project and it aims to develop system which will enable elderly people to live independently. These systems consist of a large number of sensors which make wireless sensor network. In this paper, different wireless technologies that can be used for communication in systems that are designed to support independent living of elderly people, have been described. The most important focus is at wireless personal area network technologies, like ZigBee, Bluetooth, Bluetooth Low Energy and wireless local area network technologies (e.g., Wi-Fi). There are many obstacles in designing wireless sensor network and most of them concern energy efficiency and interoperability of different technologies that are being used for communication. The main challenge in the current technology world is tremendous increase of use of various wireless devices and technologies, which can cause relatively high interference, so that the wireless devices can stop working. Using cognitive radio in solving the interoperability problem of different wireless technologies in wireless sensor networks has become interesting research topic. In this paper, research on interoperability of different wireless technologies is presented. Using Spectrum Engineering Advanced Monte Carlo Analysis Tool wireless sensors network in home environment was modelled. Interference based on devices layout and activity was investigated. Also, possible improvements that can be made with cognitive radio are investigated and obtained results are given in this paper. 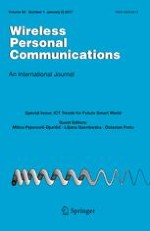 Potentials for Application of Millimeter Wave Communications in Cellular Networks