» Jetzt Zugang zum Volltext erhalten
Wichtige Hinweise
The original version of this article was revised: There is a typographical error in the acknowledgements section. The name should be "Sara J. Finney" and not "Sara J. Fin ney". Also, in the Appendix section, the columns in Table 5 were switched.
An erratum to this article is available at http://​dx.​doi.​org/​10.​1007/​s11092-016-9249-6.

Since the turn of the century, an increasing number of low-stakes assessments (i.e., assessments without direct consequences for the test-takers) are being used to evaluate the quality of educational systems. Internationally, research has shown that low-stakes test results can be biased due to students’ low test-taking motivation and that students’ effort levels can vary throughout a testing session involving both cognitive and noncognitive tests. Thus, it is possible that students’ motivation varies throughout a single cognitive test and in turn affects test performance. This study examines the change in test-taking motivation within a 2-h cognitive low-stakes test and its association with test performance. Based on expectancy-value theory, we assessed three components of test-taking motivation (expectancy for success, value, and effort) and investigated its change. Using data from a large-scale student achievement study of German ninth-graders, we employed second-order latent growth modeling and structural equation modeling to predict test performance in mathematics. On average, students’ effort and perceived value of the test decreased, whereas expectancy for success remained stable. Overall, initial test-taking motivation was a better predictor of test performance than change in motivation. Only the variability of change in the expectancy component was positively related to test performance. The theoretical and practical implications for test practitioners are discussed. 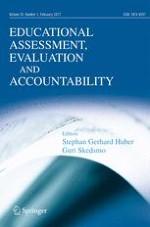 Erratum to: Change in test-taking motivation and its relationship to test performance in low-stakes assessments

Long-term effects of the implementation of state-wide exit exams: a multilevel regression analysis of mediation effects of teaching practices on students’ motivational orientations