Chaotic dynamics generated in a chaotic neural network model are applied to 2-dimensional (2-D) motion control. The change of position of a moving object in each control time step is determined by a motion function which is calculated from the firing activity of the chaotic neural network. Prototype attractors which correspond to simple motions of the object toward four directions in 2-D space are embedded in the neural network model by designing synaptic connection strengths. Chaotic dynamics introduced by changing system parameters sample intermediate points in the high-dimensional state space between the embedded attractors, resulting in motion in various directions. By means of adaptive switching of the system parameters between a chaotic regime and an attractor regime, the object is able to reach a target in a 2-D maze. In computer experiments, the success rate of this method over many trials not only shows better performance than that of stochastic random pattern generators but also shows that chaotic dynamics can be useful for realizing robust, adaptive and complex control function with simple rules. 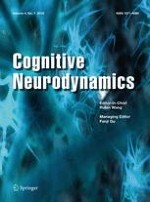 Analysis of stability of neural network with inhibitory neurons

Effects of the anesthetic agent propofol on neural populations