Small-scale food enterprises occupy a critical space in the food system of Kingston, Jamaica. While they serve the entire population, poor urban households are disproportionately reliant on small-scale food retailers. The nodes and networks of retailers play an important role in the value and commodity chain by providing access to comparatively cheap food but are often impacted by economic vagaries and state-level regulation amongst other factors which potentially challenge the sustainability of the trade. These issues are potentially offset by a highly dynamic system where entry into the trade is maintained by the high levels of unemployment and limited alternatives, even in the informal sector. While the challenges are the likely result of state-level deficiencies, it is possible that these problems are both alleviated and exacerbated by various strategies used to claim space and negotiate food-based livelihoods in the city. This research attempts to fill a conspicuous gap in the literature by examining the pathology of the urban food system as it relates to the characterisation, challenges and experiences of small-scale food retailers. The results are based on a combination of questionnaire surveys and interviews with small-scale food retailers in the city. They reveal the existence of gender- and age-based differences in education, profits earned and motivations for entry. Additionally, these vendors face a range of challenges including deficiencies in state support. While many of their challenges are partly compensated by reliance on inwardly focussed networks, statistical characterisation may provide vital insight into opportunities for policy interventions which specifically target this marginalised group. 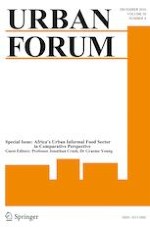 From Overt Opposition to Covert Cooperation: Governance of Street Food Vending in Nanjing, China

The State and the Origins of Informal Economic Activity: Insights from Kampala

The Informal Food Sector and Cohabitation with Supermarkets in Windhoek, Namibia