Groundwater is the major source of water and a critical resource for socioeconomic development in semi-arid environments like the Johannesburg area. Environmental isotopes are employed in this study to characterise groundwater recharge and flow mechanisms in the bedrock aquifers of Johannesburg, which is known for polluted surface water. With the exception of boreholes near the Hartbeespoort Dam, groundwater in the study area was derived from meteoric water that has undergone some degree of evaporation before recharge, possibly via diffuse mechanisms. Boreholes that tap groundwater from the Transvaal Supergroup Formation show depletion in δ18O and δ2H values. This is attributed to diffuse recharge through weathering fractures at high elevation that are undergoing deep circulation or recharge from depleted rainfall from the high-latitude moisture sources. The influence of focused recharge from the Hartbeespoort Dam was observed in the boreholes north of the dam, possibly as a result of the north–south trending fault lines and the north-dipping fractures in the bedding planes of quartzites. This is also supported by a reservoir water budget method which indicated a mean annual net flux of 2,084,131 m3 from Hartbeespoort Dam recharging groundwater per annum. Using tritium in the dam and boreholes located at 750 m and 5400 m downstream, average groundwater flow velocity was estimated as 202 m/year. An open system was observed in shale, andesite and granitic-gneiss aquifers indicating soil CO2 as a dominant source of carbon (δ13C) in groundwater. A closed system was also observed in dolomitic aquifers indicating carbonate dissolution as the predominant source of carbon. 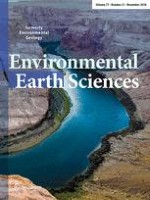 Editorial to the topical collection in Environmental Earth Sciences “Stone in the architectural heritage: from quarry to monuments—environment, exploitation, properties and durability”