Currently, the experimental study on the internal force chain of particulate matter indirectly explores the distribution of particle chains inside the force chain through the observation of the deformation caused by the particle material during extrusion using the photoelastic device. However, an experimental method is still not available for a force chain in the parallel-plate particle flow friction system, because the particulate matter is small, and the system is in the interior of the friction interface. Therefore, this study uses the DEM model to simulate and analyze the size and shape evolution of the force chains using the PFC software.

DEM is a numerical method, proposed by Cundall and Strack [ 41] in the 1970s, to study the mechanical behavior and motion of discontinuous particulate matter. The basic idea of DEM is to treat the particulate matter as a set of rigid discrete elements. Initially, each granule is in equilibrium. When the external conditions change, some of the granules have a corresponding movement or displacement under gravity and external load, which contact with other granules resulting in a new state of force according to the contact model. More granules obtain this new movement or achieve displacement because of the transmission of the force. The force-displacement law correlates the forces and displacements between the granules that are in contact with each other or between the granules and the walls. The normal force component can be calculated according to Eq. ( 1) [ 42]
$$F_{i}^{n} = k_{\text n} {\varvec{U}}_{i}^{n} ,$$
(1)
where \(k_{\text{n}}\) is the normal stiffness of the contact point, \(\varvec{U_{i}}\) the normal contact displacement vector, and i the direction of the coordinate axis.
The tangential contact force is calculated in increments, and the tangential contact force component obtained by superposition is given by Eqs. ( 2) and ( 3)
$$F_{i}^{s} \leftarrow F_{i}^{s} + \Delta F_{i}^{s} \le \mu F_{i}^{n} ,$$
(2)
$$\Delta F_{i}^{s} = -\, k_{\text s} \Delta U_{i}^{s} ,$$
(3)
where \(\Delta U_{i}^{s}\) is the contact displacement increment, \(\Delta F_{i}^{n}\) the tangential increment of the elastic contact force, \(k_{\text{s}}\) the tangential stiffness of the contact point, and \(\mu\) the friction coefficient.
In this study, the Hertz-Mindlin contact model is a non-linear contact model that is closely based on the Mindlin and Deresiewich and the Cundall models. The theory is defined by the shear modulus G and Poisson’s ratio \(\nu\) of two spheres that are in contact with each other.
The normal stiffness of the contact is calculated by Eq. ( 4)
$$k_{\text{n}} = \left( {\frac{{2\tilde{G}\sqrt {2\tilde{R}} }}{{3\left( {1 - \tilde{\nu }} \right)}}} \right)\sqrt {U_{i}^{n} } ,$$
(4)
and the tangential stiffness of the contact is calculated by Eq. ( 5)
$$k_{\text{s}} = \left( {\frac{{2(\tilde{G}^{2} 3\left( {1 - \tilde{\nu }} \right)\tilde{R})^{1/3} }}{{2 - \tilde{\nu }}}} \right)\left| {F_{i}^{n} } \right|^{1/3} ,$$
(5)
where \(\tilde{G}\) is the equivalent elastic shear modulus, \(\tilde{\nu }\) the equivalent Poisson’s ratio, and \(\tilde{R}\) the equivalent radius.
The flow chart of the simulation is shown in Fig.  3. The requirement simulation model consists of three basic components: the composition of the granular matter; contact characteristics; and definition of the material properties, boundary conditions, and input of initial parameters.
×

3.2 Changes in the force chain direction

3.3 Shape of force chains changing with load in different stages

This study verifies the simulation result by setting a test and observing the changes in the gap value using a rotary polishing testing machine to achieve infinitely long shearing motion. We fixed the rectangular samples of a specific size on the machine, imported the particles, rotated the abrasive disc with sandpaper to abrade the rectangular samples, and used an eddy current sensor to collect the gap value data. About the processing condition parameters, the load value is set to four values of 7 500 Pa, 10 000 Pa, 15 000 Pa, and 20 000 Pa; for the speed values of 60 r/min, 90 r/min, 120 r/min and 150 r/min; and three particle sizes of the same material particles: 1# (0.2 –0.3 mm), 2# (0.4 –0.5 mm), and 3# (0.6 –0.8 mm).

According to the particle size, load and speed, the test plan is presented in Table  2.
Table 2
Test plan

During the test preparation, it was observed that when the particle size was large, and the rotation speed was high, the silicon carbide abrasive paper used to protect the sample on the abrasive disk wears sharply and breaks in a short duration, resulting in a large error. Therefore, in the experiment of the interfacial gap characteristics at different speeds, only the 1# particles were used to perform at loads of 7 500 Pa and 20 000 Pa.
The relationship between the gap value and speed is shown in Fig.  29. It can be seen that when the speed is 150 r/min, the gap value is obviously reduced. It is observed that the turning point occurred due to the excessive centrifugal force generated by an increase in speed. At the same time, the difference in the turning point of 7 500 Pa (90 r/min) and 20 000 Pa (120 r/min) indicates that the load is the influencing factor of the third body particle importing. The distribution and load rate of the weak force chains, which do not change much, may cause a small change in gap value before 150 r/min. At the same time, a decrease in the gap value caused by excessive centrifugal force also reflects the phenomenon that the direction of the force chain is biased toward the x axis when the speed is increased, indicating that the speed during the processing should not be too big.
×

It is important to explore the evolution of the internal force chains in the friction system between the parallel plates, because it has a great significance in the research on how to improve the surface quality at abrasive flow machining. In this study, a 2D Hertz-Mindlin contact model of the granular material Poiseuille shear flow is established using DEM for an ideal state of the parallel-plate granular flow. The direction of the strong and weak force chains is investigated using external and internal parameters as well as the distribution and load characteristics of the weak force chains. The external parameters include the load and the drive surface speeds, and the internal parameters include the friction coefficient between the granules, number of granular layers, and granular diameter. The load and distribution rates of the weak force chains are affected differently by those parameters. The intersection of the strong and weak force chain component ratios can be used as a critical point in the whole motion stage. The greater the value of the intersection point is, the more likely the whole motion will occur. An increase in load and number of layers cause the force chain’s direction to be biased toward the y axis, and an increase in velocity causes the force chain direction to be biased toward the x axis after v = 0.4 m/s. The shapes of the force chain have different changes under the influence of different loads. The force chain distribution is concentrated in the initial stage of shear dilatancy, and the abrading process has a high efficiency. It is easy to control the abrasive machining precision. The simulation results show that an increase in load and granular layer will deteriorate the quality of abrading, and an increase in velocity, friction coefficient between granules, and granular diameter will improve the quality of abrading. The experimental results indicate that the gap value does not change much with the processing conditions (except the particle diameter, which directly affects the gap value), and the processing speed should not be too high. These are also in agreement with the simulation results up to some extent. 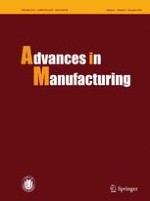