As technologies for deep underground development such as tunneling underneath mountains or mass mining at great depths (>1,000 m) are implemented, more difficult ground conditions in highly stressed environments are encountered. Moreover, the anticipated stress level at these depths easily exceeds the loading capacity of laboratory testing, so it is difficult to properly characterize what the rock behavior would be under high confinement stress conditions. If rock is expected to fail in a brittle manner, behavior changes associated with the relatively low tensile strength, such as transition from splitting to the shear failure, have to be considered and reflected in the adopted failure criteria. Rock failure in tension takes place at low confinement around excavations due to tensile or extensional failure in heterogeneous rocks. The prospect of tensile-dominant brittle failure diminishes as the confinement increases away from the excavation boundary. Therefore, it must be expected that the transition in the failure mechanism, from tensile to shear, occurs as the confinement level increases and conditions for extensional failure are prevented or strongly diminished. However, conventional failure criteria implicitly consider only the shear failure mechanism (i.e., failure envelopes touching Mohr stress circles), and thus, do not explicitly capture the transition of failure modes from tensile to shear associated with confinement change. This paper examines the methodologies for intact rock strength determination as the basic input data for engineering design of deep excavations. It is demonstrated that published laboratory test data can be reinterpreted and better characterized using an s-shaped failure criterion highlighting the transition of failure modes in brittle failing rock. As a consequence of the bi-modal nature of the failure envelope, intact rock strength data are often misinterpreted. If the intact rock strength is estimated by standard procedures from unconfined compression tests (UCS) alone, the confined strength may be underestimated by as much as 50 % (on average). If triaxial data with a limited confinement range (e.g., σ3 ≪ 0.5 UCS due to cell pressure limitations) are used, the confined strength may be overestimated. Therefore, the application of standard data fitting procedures, without consideration of confinement-dependent failure mechanisms, may lead to erroneous intact rock strength parameters when applied to brittle rocks, and consequently, by extrapolation, to correspondingly erroneous rock mass strength parameters. It follows that the strength characteristics of massive rock differ significantly in the direct vicinity of excavation from that which is remote with higher confinement. Therefore, it is recommended to adopt a differentiated approach to obtain intact rock strength parameters for engineering problems at lower confinement (near excavation; e.g., excavation stability assessment or support design), and at elevated confinement (typically, when the confinement exceeds about 10 % of the UCS) as might be encountered in wide pillar cores. 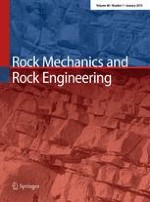