This study examines the size distribution and other characteristics of firebrand exposure during the 2007 Angora fire, a severe wildland–urban interface fire in California. Of the 401 houses that received direct interface fire exposure 61% were destroyed and 30% did not burn at all. The ignition of buildings by wind-driven firebrand showers and the starting of “spot fires” in unburned vegetation ahead of wildfires have been observed for some time. Empirically quantifying the exposure severity or describing how many firebrands of what size and over what duration and distance cause ignition problems of concern has not yet been possible. However, a unique opportunity to gather empirical firebrand data from an actual interface fire evolved in the days immediately following the Angora fire. Digital analyses of burn patterns from materials exposed to the Angora fire were conducted to determine firebrand size distributions. It is probable that some burn patterns were larger in area than the firebrands due to progressive combustion or melting, but it was assumed that the overall size distributions of burn pattern areas were representative of actual firebrand sizes. This assumption was investigated by exposing sections of materials collected in the Angora fire to wind driven firebrands generated in the laboratory using the unique NIST Dragon’s lofting and ignition research facility (NIST Dragon’s LAIR facility). The firebrand size distributions reported were compared to firebrand size distributions from experimental firebrand generation in both recent laboratory building ignition studies conducted by NIST and from historical firebrand field studies. Such data is needed to form the basis of effective and appropriate interface fire hazard mitigation measures as well as modeling fire spread. Comparisons are made to current wildfire protection building construction regulations and test standards. The most salient result of this study is documentation of the consistently small size of firebrands and the close correlation of these results with the sizes of experimentally generated firebrands. 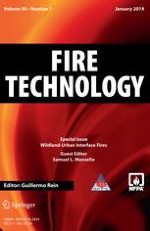 Even Greater than the Sum of Its Parts

Ignition of Mediterranean Fuel Beds by Several Types of Firebrands