The aim of this study is to evaluate and compare the chemical composition and microstructure of two femoral stems manufactured in ISO 5832-9 austenitic stainless steel by different manufacturers. Both the femoral stems under study are used in Brazil. Chemical analyses of the elements were performed by glow discharge optical emission spectrometry. The microstructure of the stems was characterized by optical and scanning electron microscopy and x-ray diffraction. Vickers hardness measurements were also taken. Both stems exhibited small amounts of Z-phase dispersed in the austenitic matrix and had similar grain sizes of austenite. The hardness was 46% higher in one stem, which was attributed mainly to the higher nitrogen content of this stem. The results also showed that small variances, although still within the requirements of the standard, produce differences of the Z-phase, grain size, and hardness of the steels. The control of these characteristics has clinical relevance because it has a direct influence on fatigue and corrosion resistance. 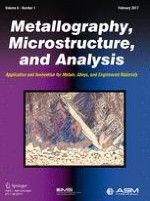 Can You Identify the Microstructure?

On the Degradation Modes of Various Steel Grades Used in Heat Recovery Systems: An Application from the Petrochemical Industry