Microfibrillated cellulose (MFC) was prepared by disintegration of bleached softwood sulphite pulp through mechanical homogenization. The surface of the MFC was modified using different chemical treatments, using reactions both in aqueous- and organic solvents. The modified MFC was characterized with fourier transform infrared spectroscopy (FTIR), X-ray photoelectron spectroscopy (XPS) and transmission electron microscopy (TEM). Epoxy functionality was introduced onto the MFC surface by oxidation with cerium (IV) followed by grafting of glycidyl methacrylate. The length of the polymer chains could be varied by regulating the amount of glycidyl methacrylate added. Positive charge was introduced to the MFC surface through grafting of hexamethylene diisocyanate, followed by reaction with the amines. Succinic and maleic acid groups could be introduced directly onto the MFC surface as a monolayer by a reaction between the corresponding anhydrides and the surface hydroxyl groups of the MFC. 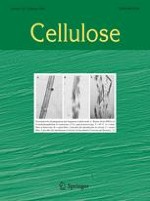 Investigation of the physicochemical properties of microcrystalline cellulose from agricultural wastes I: orange mesocarp

Elucidation of the fibrous structure of Musaceae maturate rachis