A new stabilized method is presented for coupled chemo-mechanical problems involving chemically reacting fluids flowing through deformable elastic solids. A mixture theory model is employed wherein kinematics is represented via an independent set of balance laws for each of the interacting constituents. A significant feature of the mixture model is the interactive force field in the momentum balance equations that couples the constituents implicitly at the level of the governing system of equations. The constitutive relations for the constituents in the mixture model are based on maximization of the rate of entropy production. Since each constituent is not discretely modeled and the interactive effects are mathematically coupled at the local continuum level, the resulting system serves as a physics-based reduced-order model for the complex microstructure of the material system. When constitutive equations are substituted into the balance laws, they give rise to a system of coupled nonlinear PDEs. Evolving nonlinearity and coupled chemo-mechanical effects give rise to spatially localized phenomena, namely boundary layers, shear bands, and steep gradients that appear at the reaction fronts. For large reaction rates, the balance of mass of the fluid becomes a singularly perturbed equation (reaction-dominated), which may exhibit boundary and/or internal layers. Likewise, for large reaction rates and/or low diffusivity, the balance of linear momentum for the fluid constituent also becomes a singularly perturbed PDE. Presence of these features in the solution requires stable numerical methods, and we present a variational multiscale (VMS)-based stabilized finite element method for the initial-boundary value problem. Mathematical attributes of the method are investigated via a range of numerical test cases that involve diffusion of chemically reacting fluids through nonlinear elastic solids. Enhanced stabilization features and higher spatial accuracy of the models and the methods are highlighted. 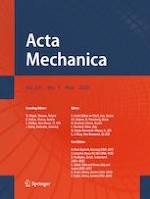