This essay examines a figure usually considered with justification to be the premier Roman historian of the nineteenth century and perhaps the greatest scholar in his field of all times. It tries to show why Mommsen focuses, particularly in the last volume of his magisterial study of Rome down to the end of the Republic, on the life and activities of Julius Caesar. The essay concludes by reassessing conventional narratives about why Mommsen admired Caesar, so much so that he could not bring himself to describe the death of the Roman leader whom he characterized as the founder of a “military monarchy.” 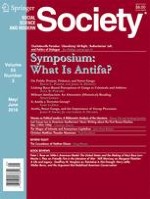 Symposium: What Is Antifa?

Women as Political Leaders: a Bibliometric Analysis of the Literature

Symposium: What Is Antifa?

Antifa, Street Gangs, and the Importance of Group Processes