Variously weathered pink andesite and autobreccia samples collected from the boreholes at the elevation of the İzmir Subway line were investigated for mineralogical content and physical, mechanical and deformation properties, following which the andesitic rocks were compared with different andesites from various parts of Turkey as well as from Slovakia and Romania based on published data. A weathering grade zoning graph that takes elasticity modulus (Et) values into account was introduced for andesitic rocks from Turkey and Europe. The aim of the study was to determine the variability in strength, strain and elastic properties of different andesites at different weathering stages. In this context, two engineering classifications for rock materials based on uniaxial compressive strength (σc), Et and Poisson’s ratio (ν) were used to classify the fresh and weathered andesites. The modulus ratio classification proposed by Deere and Miller (Report AFML-TR-65-116, Air Force Weapons Laboratory Kirtland Air Force Base, Albuquerque, NM, USA; 1966) failed to differentiate the various weathering grades of the andesites. However, the m-value obtained from the plot of the σc value against the \( \frac{{\mathrm{E}}_{\mathrm{t}}}{\nu } \)ratio on a log–log scale, as suggested by Türk and Dearman (Bull Int Assoc Eng Geol 28:162–167; 1983), was found to be unique for each rock type and to be a distinguishing parameter for andesitic rocks. Thus, the upper and lower bound limits of the m-value were defined for the andesite samples. The m-value was also used to calculate horizontal strain at failure. Higher horizontal strain values were calculated for the highly weathered andesites having higher m-values. The reasons for the significantly lower strength and Et values for the İzmir Subway line andesites were interpreted with regard to the mineralogical and petrographical properties. 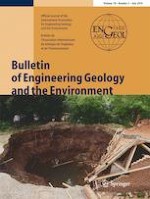 Co-seismic surface rupture of Papatea fault and reactivation mechanism of the Clarence landslide during the 2016 Mw7.8 Kaikoura earthquake, New Zealand

Deformations of loess soils caused by changes in the microaggregate structure