Before climate change is considered in long-term coastal management, it is necessary to investigate how institutional stakeholders in coastal management conceptualize climate change, as their awareness will ultimately affect their actions. Using questionnaires in eight Baltic Sea riparian countries, this study examines environmental managers’ awareness of climate change. Our results indicate that problems related to global warming are deemed secondary to short-term social and economic issues. Respondents agree that problems caused by global warming will become increasingly important, but pay little attention to adaptation and mitigation strategies. Current environmental problems are expected to continue to be urgent in the future. We conclude that an apparent gap exists between decision making, public concerns, and scientific consensus, resulting in a situation in which the latest evidence rarely influences commonly held opinions. 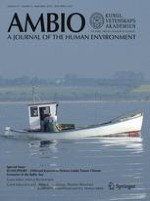 Atmospheric Nutrient Input to the Baltic Sea from 1850 to 2006: A Reconstruction from Modeling Results and Historical Data

Extremes of Temperature, Oxygen and Blooms in the Baltic Sea in a Changing Climate