Self-optimizing robotized assembly systems are able to compensate the restricted operation purpose of traditional robotized automation, in order to adapt dynamically to changed production conditions. As the human operator is directly involved in the assembly process, the interaction between the human and the robot has to be designed carefully to avoid exposing the human to excessive physical and cognitive strain. For controlling a robotized assembly cell, a Cognitive Control Unit (CCU) was developed that uses the cognitive software Soar and human-like assembly strategies to achieve a transparent and understandable assembly process. To minimize the cognitive and ergonomic risks during assembly, the CCU was extended by a graph-based assembly sequence planner (GASP). The GASP is able to find the optimal assembly sequence by using a complete assembly graph of the final product as well as generic production rules for assessing the ergonomic conditions of the individual assembly steps. The presented simulation study validates the functionality of the GASP with respect to the number of workflow switches between the human and the robot, the number of switches between the robotic tools, as well as the number of assembly group switches required to collaboratively assemble a model of a Stromberg carburetor. The results show a significant reduction of all three measures. The number of parts and the type of assessment of the assembly steps have a significant impact here. 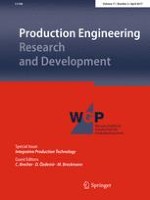