This paper considers the effect the Reynolds number has on a turbulent boundary layer that is subjected to concentrated suction, applied through a short porous wall strip. The response of the skin friction coefficient to suction is strongly modulated by the momentum thickness Reynolds number R θ 0. The magnitude and wavelength of the variation of the skin friction decrease as R θ 0 increases. Measurements clearly show that it is the combination of R θ 0 and the suction rate σ that controls the boundary layer response. Relaminarisation of the near-wall flow, which occurs just downstream of the suction strip when σ =5.5 and R θ 0=660, could not be achieved at higher Reynolds numbers. It is suggested that the ratio R θ 0/ σ should not exceed a (as yet undetermined) critical value if pseudo-relaminarisation is to occur. The mean velocity profiles differ from the undisturbed profile for all the values of R θ 0 and σ considered here. Although the redistribution of the turbulent kinetic energy among the normal Reynolds stresses is affected by σ, a variation in R θ 0 does not appear to alter the effect of σ on this redistribution. 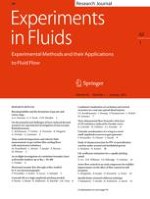 The flow field near the edge of a model porous medium

Order and disorder in particle–liquid flows in a pipe