The Support Vector Machine (SVM) has achieved promising classification performance. However, since it is based only on local information (Support Vectors), it is sensitive to directions with large data spread. On the other hand, Nonparametric Discriminant Analysis (NDA) is an improvement over the more general Linear Discriminant Analysis (LDA) where, the normality assumption from LDA is relaxed. Furthermore, NDA incorporates the partially global information to detect the dominant normal directions to the decision surface, which represent the true data spread. However, NDA relies on the choice of the κ-nearest neighbors (κ-NN’s) on the decision boundary. This paper introduces a novel Combined SVM and NDA (CSVMNDA) model which controls the spread of the data, while maximizing a relative margin separating the data classes. This model is considered as an improvement to SVM by incorporating the data spread information represented by the dominant normal directions to the decision boundary. This can also be viewed as an extension to the NDA where the support vectors improve the choice of κ-nearest neighbors (κ-NN’s) on the decision boundary by incorporating local information. Since our model is an extension to both SVM and NDA, it can deal with heteroscedastic and non-normal data. It also avoids the small sample size problem. Interestingly, the proposed improvements only require a rigorous and simple combination of NDA and SVM objective functions, and preserve the computational efficiency of SVM. Through the optimization of the CSVMNDA objective function, surprising performance gains were achieved on real-world problems. In particular, the experiments on face recognition have clearly shown the superiority of CSVMNDA over other state-of-the-art classification methods, especially, SVM and NDA. 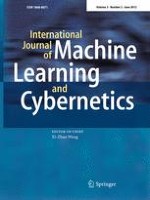 A robust framework for face contour detection from clutter background

Clustering based on Steiner points