» Jetzt Zugang zum Volltext erhalten
Wichtige Hinweise
The foundations of the ideas developed in this article were presented at the COIN workshop at AAMAS’12 [34] and briefly summarized at the AAMAS’12 conference [33]. 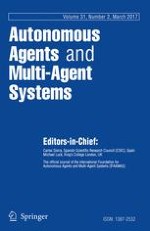 Negotiating with other minds: the role of recursive theory of mind in negotiation with incomplete information

Aborting, suspending, and resuming goals and plans in BDI agents