The rhetoric of nations, such as Israel, often assigns immigrants social positions in nationalist reconstructions. Given the active role the media has taken in reconstructing the nation, this paper suggests looking at Master Chef Israel (MCI) as an arena in which immigrant contestants are staged as recruited to engage in the reconstruction and branding of Israel. A narrative analysis of five seasons of MCI and interviews with 15 contestants tracked three narratives, each of which reveals a different mode of branding Israel. The show branded Jewish immigrants as equipped with the necessary capital to become Israelis, while those who converted to Judaism and immigrated to Israel were expected to show commitment both to their new religion and to their new country. In the third narrative, MCI staged the patriotism of individuals who immigrated after marrying an Israeli citizen as a gradually emerging sentiment based on the extent to which their difference enabled the incorporation of an Israeli component into their overall identity. 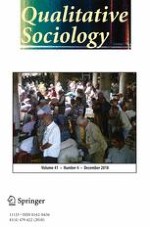 More than Subversion: Four Strategies for the Dominated

The Contested State vs. Contentious Workers: The Symbolic Labor Politics in Transitional China