Recent studies have shown that exposing individuals to the concept of love influenced their subsequent helping behavior. However, the effect of this concept was found only when people were exposed to this concept for certain amount of time. In this study, participants who stopped to examine the stand of a well-known charitable organization were informed by a volunteer that the sale of products benefited children in the world. According to a random distribution, the love concept briefly appeared, or not, in the spoken content addressed to the participants. The findings revealed that in the love concept condition, more participants bought a product or left money in the moneyboxes displayed on the stand and, when they did so, they left higher amounts. The activation spreading theory is used to explain these results, and issues of practical relevance are discussed. 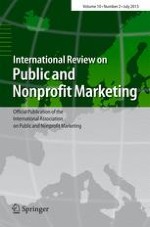 Does definition of self predict adopter dog breed choice?

Investigating factors that influence on ICT usage in higher education: a descriptive analysis

Social marketing: an application to the behaviour of breastfeeding

The untapped potential of marketing for evaluating the effectiveness of nonprofit organizations: a framework proposal