We performed an observational longitudinal cohort study of patients with stroke. At 1 week and 4 months post-stroke, patients were assessed with modified Rankin Scale (mRS) and Barthel Index (BI) and were administered the EQ-5D-5L and EQ-5D-3L, including the EQ VAS. The EQ-5D-5L index scores were derived using the crosswalk methodology developed by the EuroQol Group. We classified patients according to two external criteria, based on mRS or BI, into 3 categories: ‘improvement,’ ‘stable’ or ‘deterioration’. We assessed the responsiveness of each measure in each patient subgroup using: effect size (ES), standardized response mean (SRM), F-statistic, relative efficiency and area under the receiver operating characteristic curve. 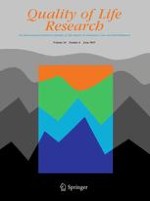 The emotional distress of children with cancer in China: an item response analysis of C-Ped-PROMIS Anxiety and Depression short forms

The Dutch Shoulder Pain and Disability Index (SPADI): a reliability and validation study

The potential for a generally applicable mapping model between QLQ-C30 and SF-6D in patients with different cancers: a comparison of regression-based methods