Drought and wetness events were studied in the Northeast Algeria with SPI and RDI. The study area includes a variety of climatic conditions, ranging from humid in the North, close to the Mediterranean Sea, to arid in the South, near the Sahara Desert. SPI only uses precipitation data while RDI uses a ratio between precipitation and potential evapotranspiration (PET). The latter was computed with the Thornthwaite equation, thus using temperature data only. Monthly precipitation data were obtained from 123 rainfall stations and monthly temperature data were obtained from CFSR reanalysis gridded temperature data. Both data sets cover the period 1979–80 to 2013–14. Using ordinary kriging, the gridded temperature data was interpolated to all the locations having precipitation data, thus providing to compute SPI and RDI with the same observed rainfall data for the 3-, 6- and 12-month time scales. SPI and RDI were therefore compared at station level and results and have shown that both indices revealed more sensitive to drought when applied in the semi-arid and arid zones. Differently, more wetness events were detected by RDI in the more humid locations. Comparing both indices, they show a coherent and similar behavior, however RDI shows smaller differences among climate zones and time-scales, which is an advantage relative to the SPI and is likely due to including PET in RDI. 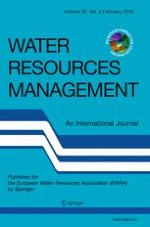 Evaluating the Impacts of a Large-Scale Multi-Reservoir System on Flooding: Case of the Huai River in China