In this paper, we comparatively investigated the spontaneous wetting and the impact dynamics of surfactant-laden drops on hydrophobic polypropylene surfaces. We used the organic anionic surfactant sodium dodecyl sulfate (SDS) and two silicone-based nonionic surfactants, one of which was a so-called superspreader. The wetting dynamics during spontaneous spreading could be divided into an early inertia-dominated stage and a later viscosity-dominated stage. Both could be described by power laws with different exponents. Further, wetting dynamics during the faster inertial stage was independent of surfactant properties, while surfactants played a role in the slower viscous stage. During drop impact, regardless of the impact speed the early wetting stage was controlled by inertial and capillary forces only. But, different from spontaneous spreading, surfactants influenced the wetting dynamics of this early stage. After the drops reached the maximum spreading radius r max they started recoiling and reducing again their contact radius. We observed, however, that despite reducing the static surface tension of the water drops, not all surfactants promoted them to spread out to a larger radius than the pure water drops during the early impact stage. We thus introduced a new time scale, \( \tau =\sqrt{\rho {r}_{\max}^3/\gamma } \), that uses the maximum spreading radius of the drops upon impact and that allows rescaling the durations of the inertial wetting stages to a universal master curve. Finally, we observed that only those drops containing superspreader re-started wetting the surface after recoiling, but the dynamics is not yet completely clear.
× 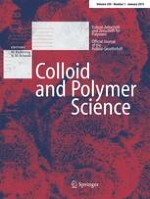 Preparation of multi-responsive micelles for controlled release of insulin