The present research aims to assess how occupational stereotypes, and in particular, stereotypes about doctors, influence the observers’ perception of the emotions expressed by members of this group. For this, 60 men and women judged the emotions of women who expressed either happiness, anger, sadness, or a neutral expression and whose faces were either uncovered or covered with a surgical mask, a niqab, or a hat and scarf such that only an identical portion of the face around the eyes was visible. Congruent with the occupational stereotype, women dressed as doctors were perceived highest on competence and warmth, but also as emotionally restrained such that they were rated as experiencing lower levels of emotions relative to the same women wearing other face covers or with uncovered faces.

Titel
Competent and Warm but Unemotional: The Influence of Occupational Stereotypes on the Attribution of Emotions
Autoren:
Shlomo Hareli
Shlomo David
Ursula Hess 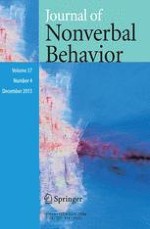 How Fast are the Leaked Facial Expressions: The Duration of Micro-Expressions

Conversational Synchronization in Naturally Occurring Settings: A Recurrence-Based Analysis of Gaze Directions and Speech Rhythms of Staff and Clients with Intellectual Disability

Sidedness in Carrying Objects Other than Infants Resembles Sidedness in Infant Cradling: A Two Nation Study of Gender Differences