Balsa, with its low density and relatively high mechanical properties, is frequently used as the core in structural sandwich panels, in applications ranging from wind turbine blades to racing yachts. Here, both the cellular and cell wall structure of balsa are described, to enable multi-scale modeling and an improved understanding of its mechanical properties. The cellular structure consists of fibers (66–76 %), rays (20–25 %) and vessels (3–9 %). The density of balsa ranges from roughly 60 to 380 kg/m3; the large density variation derives largely from the fibers, which decrease in edge length and increase in wall thickness as the density increases. The increase in cell wall thickness is predominantly due to a thicker secondary S2 layer. Cellulose microfibrils in the S2 layer are highly aligned with the fiber axis, with a mean microfibril angle (MFA) of about 1.4°. The cellulose crystallites are about 3 nm in width and 20–30 nm in length. The degree of cellulose crystallinity appears to be between 80 and 90 %, considerably higher than previously reported for other woods. The outstanding mechanical properties of balsa wood in relation to its weight are likely explained by the low MFA and the high cellulose crystallinity. 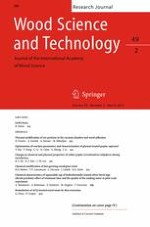 The biomechanics of bamboo: investigating the role of the nodes