The spatial and temporal variations of Fe, K, Co, V, Cr, Cu, Ni, Zn, and Pb were determined in the sediments of Taihu Lake, the third largest freshwater lake in China and categorized into natural origin (Fe, K, Co, and V) and human contamination (Cr, Cu, Ni, Zn, and Pb) groups by principal component analysis. Most of the metals were positively correlated with the clay content (<4 μm) and negatively correlated with the >16 μm fraction, indicating the dominant role of grain size in regulating metals concentrations. Geochemical normalization and enrichment factors (EFs) were introduced to reduce the confounding of variable grain size and to quantify anthropogenic contributions. Higher EF values for Cr, Cu, Ni, and Zn occurred in the north Zhushan, Meiliang, and Gonghu Bays, indicating a high level of human contamination from the northern cities, such as Wuxi and Changzhou. Higher EF values of Pb were also present in the southwest and east lake areas, denoting the existence of additional anthropogenic sources. Chrome, Cu, Ni, Zn, and Pb showed increasing EF values in the top layers of sediment cores, indicating enhancing contamination since 1970s with rapid economy development in the catchment. These results indicate that geochemical normalization is a necessary and effective method in quantifying heavy metals contamination, and that historic sediment should be used as background values in calculating EFs. Potential risks of the heavy metals were assessed linking the consensus-based sediment quality guidelines and human contamination. Concentrations of Ni and Cr are greater than the threshold effect concentration (TEC) values, even in the sediments before 1970s, due to higher background concentrations in terrestrial parent materials. Concentrations of Ni and Cr are generally lower than the probable effect concentration (PEC) values, and concentrations of Cu and Zn are below the TEC values in the open lake areas. Whereas, concentrations of Ni and Cr are surpassing the PEC values and Cu and Zn are surpassing the TEC values in the north bays due to the high level of human contamination, where they were with EFs over 1.2, denoting higher potential eco-risks. 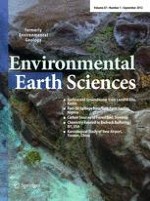 Variation in river multi-element chemistry related to bedrock buffering: an example from the Adirondack region of northern New York, USA

Phosphorus adsorption characteristics at the sediment–water interface and relationship with sediment properties in FUSHI reservoir, China