We study conditions for weak selection to favor tit-for-tat (TFT) over AllD in a repeated Prisoner’s Dilemma game played in a finite population subdivided into three subpopulations under the assumption of cyclic dominance in asymmetric interactions. Assuming parent-independent mutation and uniform migration, we show that TFT is more abundant that AllD in the stationary state if the defection cost incurred by individuals in interaction with dominant defecting individuals exceeds some threshold value. This threshold value decreases as the number of repetitions of the game, the population size, or the mutation rate increases, but increases as the migration rate increases. The same conclusions hold in the case of linear dominance.

Titel
Conditions for Cooperation to be More Abundant than Defection in a Hierarchically Structured Population
Autoren:
Dhaker Kroumi
Sabin Lessard 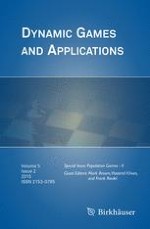 Evolutionary Dynamics of the Handicap Principle: An Example

An Effective Replicator Equation for Games with a Continuous Strategy Set