Many researchers have tested whether protected areas save tropical forest, but generally focus on parks and reserves, management units that have internationally recognized standing and clear objectives. Buffer zones have received considerably less attention because of their ambiguous rules and often informal status. Although buffer zones are frequently dismissed as ineffective, they warrant attention given the need for landscape-level approaches to conservation and their prevalence around the world—in Peru, buffer zones cover >10 % of the country. This study examines the effectiveness of buffer zones in the Peruvian Amazon to (a) prevent deforestation and (b) limit the extent of mining concessions. We employ covariate matching to determine the impact of 13 buffer zones on deforestation and mining concessions from 2007 to 2012. Despite variation between sites, these 13 buffer zones have prevented ~320 km2 of forest loss within their borders during the study period and ~1739 km2 of mining concessions, an outcome associated with the special approval process for granting formal concessions in these areas. However, a closer look at the buffer zone around the Tambopata National Reserve reveals the difficulties of controlling illegal and informal activities. According to interviews with NGO employees, government officials, and community leaders, enforcement of conservation is limited by uncertain institutional responsibilities, inadequate budgets, and corruption, although formal and community-based efforts to block illicit mining are on the rise. Landscape-level conservation not only requires clear legal protocol for addressing large-scale, formal extractive activities, but there must also be strategies and coordination to combat illegal activities. 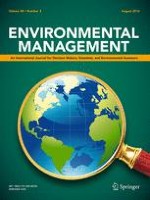 Environmental Behavior’s Dirty Secret: The Prevalence of Waste Management in Discussions of Environmental Concern and Action

A Collaborative Approach for Scoping Ecosystem Services with Stakeholders: The Case of Arrábida Natural Park