Little is known about the differences in patterns and drivers between species richness (SR) and functional diversity (FD) in aquatic plants at large scales, and the underlying assembly mechanisms are not well studied. We compared SR and FD patterns of aquatic plant assemblages in 29 subtropical lakes, and detected the underlying assembly rules. Environmental drivers of SR and FD were revealed by GLM and GAM models, and the relative importance of assembly rules was determined by a null model approach. SR and FD of aquatic plants presented different patterns and drivers in this region. SR was significantly correlated with geographic, hydrological and water quality variables. We found a lower functional richness but higher functional evenness and divergence in the highland lakes. There was no significant correlation between functional richness and environmental variables. Null model analyses showed that most values of standardized effect size were located between the confidence interval, indicating a dominance of randomness. Deterministic processes such as limiting similarity and habitat filtering were also important in individual lakes. Habitat filtering plays a stronger role shaping the hydrophyte assemblages especially with the increase of elevation, area and AWLF (amplitude of water level fluctuation). Our results demonstrated that FD, in contrast to SR, were more resistant to environmental variations, and hydrology played an important role in shaping both SR and FD patterns in lake ecosystems. Furthermore, we revealed complex assembly rules and emphasized the importance of both stochastic and deterministic mechanisms in structuring aquatic plant assemblages at the regional scale. 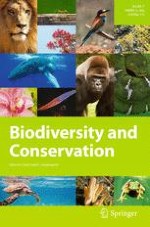 A conceptual framework to deal with outliers in ecology

Comments on “a framework for assessing readiness for tiger reintroductions”

Influence of macroclimate and local conservation measures on taxonomic, functional, and phylogenetic diversities of saproxylic beetles and wood-inhabiting fungi