Control Effect of a Large Geological Discontinuity on the Seismic Response and Stability of Underground Rock Caverns: A Case Study of the Baihetan #1 Surge Chamber | springerprofessional.de Skip to main content
TOOLBAR 1 2 3 4
SUCHE MENÜ 1 2 3 4

In this paper, the seismic stability of the #1 surge chamber of the Baihetan hydropower plant, which is influenced by a large dominating geological discontinuity [the interlayer shear weakness zone (ISWZ) C2)], is studied. An advanced, nonlinear, continuously yielding (CY) model was adopted to describe the complex mechanical properties of ISWZ C2. This model considers a power function type, normal stress dependent behavior and the progressive damage that occurred during shear tests. The applicability of the CY model is proved via a comparison with field test results and the theoretical solution. Verification work was conducted in 3DEC code to show that the 3DEC software is suitable for implementing this model. Three ground motion waveforms were utilized to conduct a seismic analysis of the #1 surge chamber after a special response spectrum matching process. The seismic analysis confirmed the control effect of ISWZ C2 on the seismic stability of the cavern. The majority of the cavern’s seismic displacement consists of elastic body movement, while the plastic deformation is relatively limited. Further, most of the deformations were caused by the contact deformation of C2. For the contact deformation of C2, the magnitude of permanent shear deformation is larger than that of the normal deformation. The magnitude of permanent shear deformation is more notable along the strike direction of C2, and the permanent normal displacement n of C2 mainly occurs along the dip direction of C2. Finally, the seismic stability of the cavern is assessed via the overload method. The seismic safety factor of the cavern is approximately 2–3. 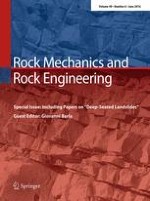 Landslide Caused Damages in a Gallery

Application of a New Rheological Model to Rock Avalanches: An SPH Approach