Coverage by international broadcasters and other media of the terrorist attacks in Paris in November 2015 made extensive use of mainstream diversity discourse to describe the victims and venues targeted by jihadists, emphasizing the unique preferences, unconventional life plans and individuality of victims. Based on sociological accounts, this paper sees that discourse as part and parcel of an individualistic ideology of diversity, which celebrates individual uniqueness and espouses relativism on the value of differences across individuals and groups. The two studies presented here address the consequences of framing the events in Paris in individual diversity (ID) ideological terms and question their impact on lay representations of the events and on support for antiterrorist policies by Greek university students. In Study 1, personal endorsement of ID ideology was associated with indirect support for strict border controls. Study 2 manipulated descriptions of victims and found that priming ID themes directly produced increased support for strict border controls and an increased understanding of the main symbolic target of the attacks as an assault against the West. The results extend the past work on the effects of ID ideas on lay representations of social discrimination. 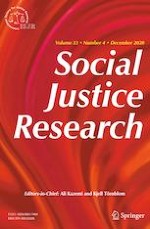 “Here, It’s Like You Don’t Have to Leave the Classroom to Solve a Problem”: How Restorative Justice in Schools Contributes to Students’ Individual and Collective Sense of Coherence