Ain Sefra watershed is located in the south-west of Algeria that has an area of 1957 km2. In its downstream part located Ain Sefra city where wadi Ain Sefra (junction of wadi Breidj and Tirkount) takes place. It crosses the completely urbanized areas where it was liable to many inundations causing lots of losses either economic or loss of life, these damages resulted from growth population and the spreading of the city over the natural space of this wadi. In this paper, the methodological approach adopted, focused on the hydrologic modeling through the Hydrologic Engineering Center’s Hydrologic Modeling System and the hydraulic modeling under the Hydrologic Engineering Center’s River Analysis System with combination of Watershed Modeling System model and Geographic Information System. The aim of this study is to analyze the inundation behavior of Ain Sefra city during extreme flood events by considering concrete retaining walls existence built by local authorities and without it. In this case, three types of simulation are performed with the return periods of 10, 100, and 1000 years. The hydraulic modeling revealed that the existence of retaining walls resulted in decrease of flood zone area, and so much less lands are endangered by floods, so that damages of flood at the study area decrease clearly, but they still been insufficient for all return periods. The simulations also highlighted that the region most affected by the flood is the downtown area. Finally, a protection concept is proposed to ensure a better passage of floods in Ain Sefra city, to reduce the risk and to protect the city against the floods. 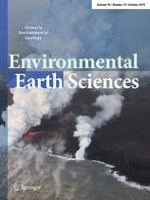 Assessment of the changes in shoreline using digital shoreline analysis system: a case study of Kızılırmak Delta in northern Turkey from 1951 to 2017

Hydrochemistry and stable isotopes (18O and 2H) characteristics of groundwater in Lokoja and its environs, central Nigeria