Democratic theorists believe that exposure to rationales for conflicting views augments deliberation and tolerance. Evidence suggests that people are more tolerant of opposing groups after being exposed to alternative points of view, yet it is unclear how source credibility and previous exposure to the source moderates this effect. Using experimental survey data from a sample of evangelical Protestant PAC donors, I manipulate Christian Right activists’ exposure to dissonant messages on immigration reform and capital punishment and vary the source of these messages. I find that when the opposing viewpoints are attributed to a religious leader generally found outside the Christian Right social movement (a mainline Protestant), evangelicals are less tolerant than when attributed to a religious leader sometimes found within the movement (a Catholic). Moreover, I find the amount of contact with the respective religious group moderates source effects. In this way, the study reveals how social networks may moderate the effect of elite discourse on public opinion. 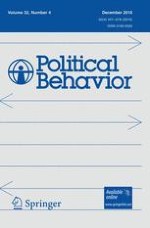 How Explicit Racial Prejudice Hurt Obama in the 2008 Election

Explicit Evidence on the Import of Implicit Attitudes: The IAT and Immigration Policy Judgments

Masculine Republicans and Feminine Democrats: Gender and Americans’ Explicit and Implicit Images of the Political Parties

The Role of Media Distrust in Partisan Voting