Crowd Work is a phenomenon of the digital economy as well as of the modern IT era. It provides a great potential for changing the way in which businesses create value. For instance, the gold producer Goldcorp 1 made its geographical databases available to the public and offered a prize to anyone who could tell them where to find gold. The results of this open call enabled Goldcorp to increase its gold production from 53,000 to 504,000 oz a year, while it cut production costs from $360 to $59 per ounce. As a consequence, the value of Goldcorp increased from $100 million to $9 billion. This example illustrates Crowd Work as a form of gainful employment that creates digital goods and services by using human, informational, and physical resources or makes extant use of digital tools (Alter 2013). In general, work is a purposeful and conscious activity. By contrast, gainful employment denotes the part of work individuals expend to ensure the means of subsistence and income generation. …
Anzeige
Vorheriger Artikel Prescriptive Control of Business Processes
Nächster Artikel Interview with Michael Nilles on “What Makes Leaders Successful in the Age of the Digital Transformation?” 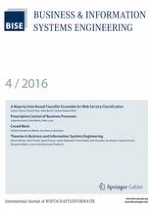 Interview with Michael Nilles on “What Makes Leaders Successful in the Age of the Digital Transformation?”