Development of denitration catalysts is highly important to controlling the level of NOx pollution. In this article, we report a novel CuO–MoO2–CeO2 catalyst with a yolk–albumen–shell structure supported on commercial γ-Al2O3 for the denitration study. The yolk catalyst CuO/γ-Al2O3 was first prepared with impregnation method by loading CuO on the γ-Al2O3 support, which provides a platform for further loading MnO, Cr2O3 or MoO2 as the albumen component. While measurements confirmed CuO–MoO2/γ-Al2O3 as the best choice, the final CuO–MoO2–CeO2/γ-Al2O3 yolk–albumen–shell catalyst was formed by loading CeO2 as the shell. The denitration performance of different catalysts in the presence or absence of SO2 was studied, followed by the investigation of denitration mechanism through XRD and SEM characterizations. The investigation reveals that the denitration performance of catalysts highly depends on their structures and compositions, which could be affected in the presence of SO2. In particular, the CuO–MoO2–CeO2/γ-Al2O3 catalyst, prepared under the conditions of roasting temperature of 400 °C, roasting time of 4 h and loading of 5%, shows outstanding SO2-resistance performance while its denitration efficiency is maintained between 81 and 83%. 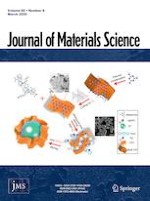 Enhancement of ionic conductivity in Li0.5La0.5TiO3 with Ag nanoparticles

A review of 3D bio-printing for bone and skin tissue engineering: a commercial approach