Cadmium selenide quantum dots (CdSe QDs), inorganic semiconducting nanocrystals, are alluring increased attraction due to their highly refined chemistry, availability, and super tunable optical properties suitable for many applications in different research areas, such as photovoltaics, light-emitting devices, environmental sciences, and nanomedicine. Specifically, they are being widely used in bio-imaging in contrast to organic dyes due to their high brightness and improved photo-stability, and their ability to tune their absorption and emission spectra upon changing the crystal size. The production of CdSe QDs is mostly assisted by trioctylphosphine oxide compound, which acts as solvent or solubilizing agent and renders the QDs soluble in organic compounds (such as toluene, chloroform, and hexane) that are highly toxic. To circumvent the toxicity-related factor in CdSe QDs, we report the synthesis of CdSe QDs capped with thioglycolic acid (TGA) in an aqueous medium, and their biocompatibility in colo-205 cancer cells. In this study, the [Cd2+]/[TGA] ratio was adjusted to 11:1 and the Se concentration (10 and 15 mM) was monitored in order to evaluate its influence on the optical properties and cytocompatibility. QDs resulted to be quite stable in water (after purification) and RPMI cell medium and no precipitation was observed for long contact times, making them appealing for in vitro experiments. The spectroscopy analysis, advanced electron microscopy, and X-ray diffractometry studies indicate that the final products were successfully formed exhibiting an improved optical response. Colo-205 cells being exposed to different concentrations of TGA-capped CdSe QDs for 12, 24, and 48 h with doses ranging from 0.5 to 2.0 mM show high tolerance reaching cell viabilities as high as 93 %. No evidence of cellular apoptotic pathways was observed as pointed out by our Annexin V assays at higher concentrations. Moreover, confocal microscopy analysis conducted to evaluate the intracellular uptake of TGA-CdSe QDs reveal that the TGA-CdSe QDs were uniformly distributed within the cytosolic side of cell membranes. Our results also suggest that under controlled conditions, direct water-soluble TGA-CdSe QDs can be potentially employed for bio-imaging colo-205 cancer cells with minimal adverse effects. 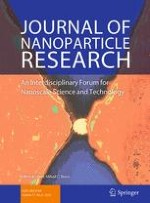 Integrated probabilistic risk assessment for nanoparticles: the case of nanosilica in food

ZnO and TiO2 nanoparticles as novel antimicrobial agents for oral hygiene: a review