Models explaining and predicting human travel behavior have gone through many changes in the past few decades. As researchers attempt to explain more and predict with more accuracy, the inclusion of social interactions in modeling and simulation is being recognized as a necessity. Among these efforts, researchers have focused on issues such as the composition of social networks, and the constraints and influences that others have on spatial decisions. An important aspect that has been understudied however is the variability or heterogeneity of individuals both as social network members and as participants in these social networks. Understanding the role individuals play in decision-making in different social networks can further define our models to include more accurate representations of human behavior. This research explores the differences between social network composition, and the decision roles members play within different social networks specifically when deciding where to participate in activities. A survey was conducted in Santa Barbara, California on social network involvement, network attributes and decision-making roles within each network. Two separate latent class cluster analysis models were developed to classify social network involvement and roles. Results show that there are clearly different types of social involvement and roles within networks. Further data collection and analysis will be used to better understand how these decision-making roles manifest themselves in activity decision-making. 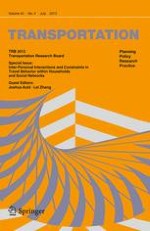 Effects of household structure and accessibility on travel

Exploring the links between personal networks, time use, and the spatial distribution of social contacts