In order to leave the current path (e.g., massive C02 emissions, overconsumption and energy intensive and oil-based production systems) and head towards a more sustainable direction, the world needs fundamental transformations of local as well as global systems, including social, economic, and cultural ones. For this purpose, we have introduced the new notion of Dedicated Innovation Systems (DIS) as an overarching framework for transformations towards sustainability. DIS go beyond exploitation-oriented Innovation systems because they attempt to achieve a dynamic balance between demand driven technology pull, science and market driven technology push, and social innovation moderating social and ethical considerations (Seidler and Bawa, 2009). Social and ethical considerations add the dedication to innovation systems and help to overcome inertia due to potential entitlements of established actors. In DIS social resilience and broad participation in economic development play an outstanding role to gain momentum for the fundamental transformation.
The dematerialization and efficiency increasing aspects of digitalization together with the substitution of oil-based materials by bio-based materials of the knowledge-based bioeconomy offer opportunities to switch to a green growth trajectory. Despite strongly decreasing employment in traditional industries due to a rationalization triggered by automation, robots and artificial intelligence, the overall employment trend is likely to be positive in the long run because of the new sectors emerging in the knowledge-based bioeconomy and in the so-called quaternary sector, which comprises new applications in the digital economy like sharing-economy platforms etc.
To set the emergence of a DIS into motion is by far not a simple task. We are confronted with the management of a complex adaptive system (Seidler and Bawa, 2009), which requires the management and coordination of extensive interactions in innovation networks, permanent adaptation due to unavoidable surprises in knowledge development because of the immanent strong uncertainty, non-linearities generating positive feedback effects, which might cause phase transitions responsible for emergent properties of the system and various other amplifying effects. However, the purpose of a DIS exactly is to support a fundamental transformation of the world production and consumption systems, which is nothing else than a phase transition from a present day’s point of view. So amplifying effects, gaining momentum and managing transition processes at bifurcation points are the genuine activities to be originated in DIS.
To improve our understanding of designing and governing DIS many questions are not yet answered. Among others:
Contributing to an answer of these questions is on our agenda for future research.

The author declares that he has no competing interests. 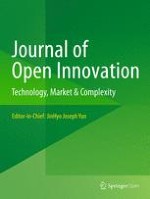 Erratum to: An open letter to Mr. Secretary general of the united nations to propose setting up global standards for conquering growth limits of capitalism