In arid and semi-arid regions without perennial water sources such as rivers or lakes, almost all water supply needs are met by groundwater. Groundwater recharge (GWR) is critical to maintain the abundance of groundwater. This paper presents a methodology based on a decision support system (DSS) that combines remote sensing, field survey and geographic information system techniques to identify suitable GWR areas. The DSS was implemented to obtain suitability maps and to evaluate the existing GWR in the study area. The DSS inputs comprised maps of rainfall surplus, slope, potential runoff coefficient, land cover/use and soil texture. The spatial extents of GWR suitability areas were identified by a hierarchical process analysis that considered five layers. The model generated a GWR map with four categories of suitability: excellent, good, moderate and poor and unsuitable. The spatial distribution of these categories showed that 0.08 and 32.3 % of the study area was classified as excellent and good for GWR, respectively, while 63.2 and 4.42 % of the area was classified as moderate and poor and unsuitable, respectively. Most of the areas with excellent to good suitability have slopes of between 4 and 8 % and are intensively cultivated areas. The major soil type in the excellent to good areas is loam, followed by clay loam, and the rainfall in these areas ranges from 150 to 260 mm. Another suitability model, in which all criteria were assigned equal influence, generated a suitability map in which 0.1 % of the study area was rated as excellent, 10.9 % as good, 82 % as moderate and 7 % as poor and unsuitable. The locations of existing GWR dams were compared with the locations indicated on the generated suitability map using the proximity analysis tool in ArcGIS 10.1. Most (77 %) of the existing GWR structures that were categorised as successful were within the excellent and good areas, followed by moderately suitable (23 %). 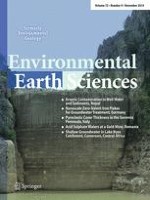 Environmental impact of the abandoned coal mines on the surface water and the groundwater quality in the south of Bochum, Germany