The Iowa caucuses are often praised for exemplifying the ideal of deliberative democracy. From this perspective, voters come together publicly on equal footing to debate and choose their preferred presidential candidate. Critics contend, however, that the caucus process is not as democratic as supporters believe. In practice, they claim, caucuses mirror power asymmetries rooted in society-based differences based on gender, race, or sexual orientation. To assess these competing claims, we test whether there is a relationship between group identity and the degree of comfort Iowa voters feel expressing an opinion during the deliberative process. Using interviews, observations, and results from a survey taken by 1024 Iowan voters, we find data consistent with both perspectives. Men and women are generally comfortable voicing beliefs at the caucus, but men more so. Additionally, women are more likely than men to feel social pressure to vote a certain way, discuss their candidate choice with others, and express a sense of community through the process. We conclude that female participants are more open and sociable than men while attending a caucus, but less assertive in sharing their opinions. Based on this criterion, we determine that the Iowa caucuses, while generally approximating the ideal of deliberative democracy, are nonetheless less democratic than its proponents contend.
Anzeige 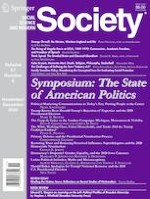 Minding the Nation Anew: Reflections on Recent Studies of Nationalism

The White Working Class, Union Households, and Trade: Did the Trump Coalition Endure?

George Orwell, the Movies, Wartime England and Me

Learning on the Left: Political Profiles of Brandeis University

Symposium: The State of American Politics